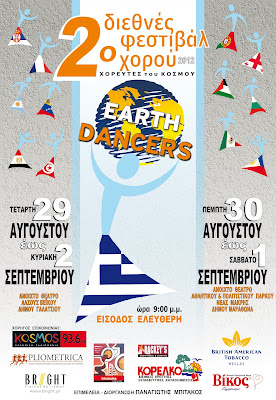 We will organize, from 24 to 31 August 2015, the 5th International Culture Festival named as EARTHDANCERS”.

I – ADMISSION
1. The ensembles wishing to participate in the 5th International Culture Festival should send the application form no later than 15 April 2015 by email earthdancers@gmail.com or by post to the address:
“EARTHDANCERS”
“International Culture Festival”
Panagiotis Bitakos
19 Averof Str. / Agios Stefanos / 14565
Greece / Hellas
2. We also request to send us with the application form, short CV of the ensemble, high quality colour photos for the catalogue and recent DVD with ensemble’s performance not shorter than 15 minutes. Organizers keep all rights for video and audio records, TV broadcasts and program of the manifestation.
3. It is possible for each country to send more than one group in order to participate to the Festival.
4. Up to the end of May 2015 the Organizing Committee will send official invitations to the ensembles, with the approval of the participation in the Festival.
5. The Organizing Committee will send the schedule for each country with the performances of the ensemble up to 15 August 2015. A similar schedule for the whole Festival period will be given to the ensemble at their arrival in Athens.

II – PARTICIPATION & ACCOMMODATION
a. The number of participants must not to be more than 30 persons, including accompanying people and drivers. Groups over 30 persons will not be admitted.
b. It is only required from the participants to pay 110 Euro per person as a participation fee (for the provided meals).
c. The Organizing Committee organizes for the ensembles their accommodation and three meals per day.
d. The accommodation will be in a camp in rooms for 4 and 6 persons.
e. The group must pay a deposit on the participation fee (40%) to the Festival’s Bank in order to close definitely its participation. The rest amount of the participation fee must be paid to the Organizing Committee on 24 August 2015 (euro in cash).

III – TRANSPORTATION
The traveling expenses to and from Municipality of Athens are the participants’ responsibility.
1. The Festival expects the arrival of the ensembles in Athens on 24 August 2015 afternoon.
2. For the groups that will arrive in Greece by plane, the transportation to and from the airport and local as well, during
the Festival, will be provided by the Organizing Committee of the International Culture Festival.
3. The groups, which will arrive in Athens by their own buses, will use these buses for all local transportations throughout the Festival program.
4. The ensembles, from countries which need a visa to enter in Greece, have to send their list of participants up to 1 June 2015 at the latest.
5. The Festival will provide a guide-interpreter (speaking English) for each ensemble, who will accompany the ensemble during the whole Festival period.
6. The Festival does not undertake to provide accommodation and meals after the end of the Festival. The groups should leave the camp on 31 August 2015 after breakfast.

IV – GENERAL TERMS & CONDITIONS
1. Performer’s age must be over 18 years old.
2. Groups arrive in Athens on afternoon on 24 August 2015 and depart from Athens after breakfast on 31 August 2015.
3. The ensemble is obliged to have a medical insurance for the members of the group during the Festival period. The lack of such a document will cause problems to Organizer in case of emergency.
4. The organizers are not responsible for any damage, which might occur to the participants or to their belongings. In
case of an accident or need for an emergent medical treatment, all medical and other expenses will be paid by the participant or the participant’s insurance.
5. The Festival expects ensemble to give one or two performances daily and appear at various promotional events in Athens and the suburban areas. The ensembles are expected to be ready to take part in the Festival Programme with two different performances respectively for the Opening and Closing Ceremonies up to 8 minutes, fragment performances for the parades 3 to 5 minutes and performances 30 to 40 minutes.
6. The ensemble must bring a national flag of its country.
7. The ensemble must perform ONLY under the accompaniment of live music. The Festival will provide sound equipment whenever appropriate. Groups that want to perform by recorded music will not be admitted.
8. The participant groups will perform only in shows arranged by the Organizing Committee of the International Culture Festival. The groups must participate in all activities of the Festival. The Organization Committee can change the
dates, times and the number of the performances.
9. The Festival provides for all groups spare time for rest. Cultural and tourist programme will be proposed to participants.
10. All groups will receive gifts for their participation. An exchange of souvenirs, during the Opening and Closing Ceremony, with the organizers and local authorities is expected.
11. The Director of the ensemble is responsible for the discipline of the group’s members.
12. All the participant groups must agree these general terms and conditions.

We will be very happy to see your ensemble in our 5th International Culture Festival “EARTHDANCERS”.